You know, you can do the same thing ten times and still learn from your experience. And this certainly holds true for travel. No matter how many times I travel to Italy I learn something new, sometimes through challenging experiences.

On my most recent trip, I flew into Milan, before heading south to Positano and Sicily. So, like any traveler, I wanted to make the most of my time in Milan. On my agenda was to try to get tickets to visit The Last Supper. Highly recommended but always requiring reservations, I decided to see what I could accomplish.

Finally, after hours and days of research, I managed to find a tour that was offered during the tight window of  date and time I had available. Since The Last Supper can only be experienced in a group and usually combined with a tour, I was happy with whatever I found. So even though this tour began at 3:30pm, and included a walking tour of Milan, I decided to book it, figuring I could see The Last Supper, and then just leave the tour whenever I felt like it, in order to make another meetup I had arranged for  an aperitivo with a friend in the center of Milan.

First mistake – Making  arrangements which included specific times for the day of arrival in Italy. After traveling all night on a nine-hour flight (sometimes much more, depending on the departure airport in the States), the stress of making a timed event can be overwhelming.

First mistake - Making arrangements which included specific times for the day of arrival in Italy. Click To Tweet

While my flight arrived at Malpensa at noon, I had failed to take into consideration the delays at baggage claim, and also at the Milano Express train station inside the airport. It quickly became apparent to me that I would not have enough time to check into my hotel and freshen up. So I decided to opt to leave my bag at the Left Luggage area inside Milano Centrale station, and take a taxi to Piazza del Duomo, where I was to meet the tour. 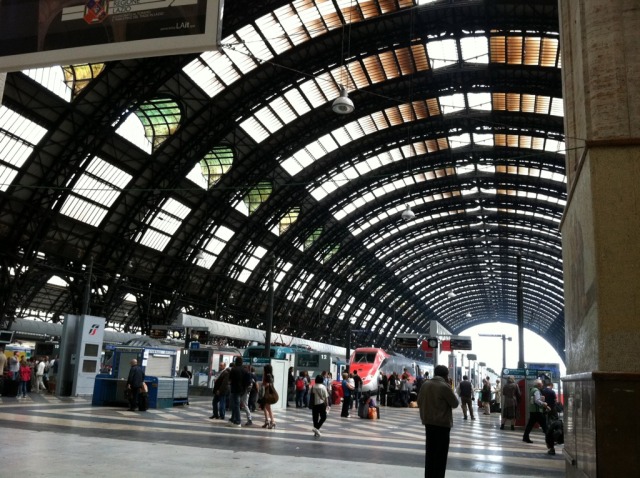 Between locating the luggage deposit area inside the station, waiting in line, and then hailing a taxi, the time was quickly disappearing, and I was feeling the stress of being late and missing my tour.  I also hadn’t planned on the traffic in the city, and why not? Milan is the capital of Italy, the country’s most populated city. As of  2016  the urban area of Milan boasts a population of 3.1 million in 2016, and the city proper is lists a population of around 1.7 million.

So naturally the 10-minute taxi ride turned into a 30-minute ride.  I don’t normally stress about too much, but being late or missing an event because of  a time constraint, definitely pushes my patience.

At 3:29pm we  were stopped at a light at one of the corners of the piazza, and I spotted the meeting location,  told the taxi driver I was getting out, paid him and literally ran across the street, just in time to see a tour guide with a group surrounding her.

Like a crazy tourist, I was out of breath as I reached the group and announced my presence, grateful that I had made it. Forget what I must have looked like. It was a hot day, so my Italian hair was definitely not going to do what I would like. But that’s okay because I was in Piazza del Duomo and I was also finally going to see The Last Supper.

I have no idea why I expected The Last Supper to be the first stop, but soon I realized from the tour guide’s instructions, that not only was it not going to be first, but that the tour would last 3 hours, and at 6:00 or 6:15 we would be able to view The Last Supper for exactly 15 minutes.

So, on top of being tired, stressed, and exasperated, I worried about having time afterwards, to get back to the Milan train station, retrieve my bag, and check into my hotel, and freshen up, all before meeting my friend at 7:30 for our arranged aperitivo. But what else could I do? I had prepaid for the tour, and if I didn’t go, who knows when I’d get to see The Last Supper?

So now I’m on a 3-hour walking tour of Milano to sites that I have already seen more than once. Did I mention that the temperature was over 80 degrees?

To be fair, I did learn some things I didn’t know on this city tour.

But my main interest was The Last Supper, and  eventually it was time. At 6:00pm  we  finally arrived at Santa Maria delle Grazie, the church which contains the mural of The Last Supper by Leonardo da Vinci.

Our group had to wait until our assigned time of 6:15, where only 30 people are allowed at a time to view the masterpiece.  At exactly 6:15pm, we filed into the space, where we could experience this incredible fresco painted on the wall inside the convent.

The wait was worth it, and I will follow up with another blog post detailing my experience inside this special place.

Because of the rush and the stress,  I know that I coudn’t fully appreciate this opportunity as much as I would have liked.

After I said goodbye to the group,  I walked several  blocks to the metro station, bought a ticket, and and rode to the train station, where I retrieved my bag.

Afterward, I took another taxi to the hotel. In the meantime I had texted my friend, who was very understanding, and we delayed the aperitivo meet until 8:30. (That’s for another blog post as well.)

I had just enough time to shower, and freshen up before then, and finally was able to unwind and enjoy the evening in Milan.

You can be sure I won’t make this mistake again.